“With God On Our Side takes a look at the theology of Christian Zionism, which teaches that because the Jews are God’s chosen people, they have a divine right to the land of Israel. Aspects of this belief system lead some Christians in the West to give uncritical support to Israeli government policies, even those that privilege Jews at the expense of Palestinians, leading to great suffering among Muslim and Christian Palestinians alike and threatening Israel’s security as a whole. 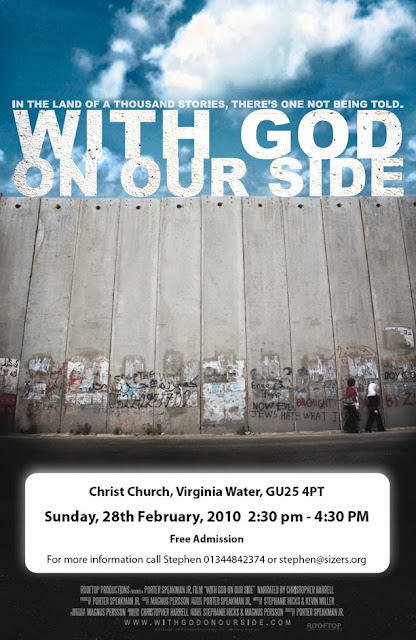 Issue of “Balance” When Sharing the Palestinian Narrative

Gary Burge on the Biblical View of Justice & the Middle East

The title for our film, “With God on Our Side” was inspired by the verse:

…while Joshua was there near Jericho: He looked up and saw right in front of him a man standing, holding his drawn sword. Joshua stepped up to him and said, “Whose side are you on—ours or our enemies’?” He said, “Neither. I’m commander of God’s army. Joshua 5:13-14a (The Message)

We believe this verse is still true today, that God does not take sides with certain people groups, nations or agendas. Rather He is for all people. Throughout history, those who have claimed God was on their side have used it to justify atrocities done in the name of Jesus. We believe once again certain Christians are approaching the people in the Middle East claiming God is on their side in a way that disregards human rights and gives unilateral support to a secular State, elevates one people group over another while using the Bible as justification. We believe there is a better way, a way of justice, peace and love for Jews and Palestinians. One that is inclusive, not exclusive. That is the heart of God.