Many of us over here are looking forward with great anticipation to Be Faithful! – Confessing Anglicans in Global and Local Mission taking place in Central Hall Westminster on Monday. As of Thursday night, over 1000 people were registered. We expect more to come.

We are encouraged by the number of Church of England Bishops who have indicated their attendance. These include:

Bishop Peter Forster of Chester, the Bishop-elect of Southwell and Nottingham, Paul Butler, and Bishop Michael Scott-Joynt of Winchester have sent public messages of support. 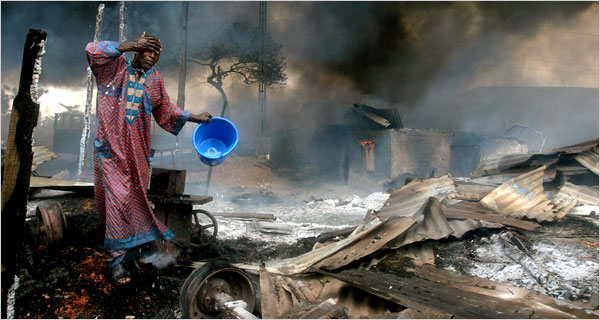 Horrific stories of ruthless killings on the streets of Jos in northern Nigeria are emerging. At least one church pastor was shot dead, along with three members of his household and an Augustinian monastery attacked, the abbot narrowly escaping death after a molotov cocktail was thrown into his room. The Church Times and The Economist have reports, with the latter reporting that mosques were also burned down. On Thursday I spoke to the Bishop of Jos, Dr Benjamin Kwashi. According to his eyewitness report, the violence was directed solely against Christians, with some Muslims shot by armed forces only when they broke curfew. Estimates vary, but it seems about 400 people might have been killed. While not lessening the horror of that atrocity, this is about twice the number killed in Mumbai.

Some pictures on the Jos diocesan website give an idea of the bleak conditions there now.

Dr Kwashi insisted the whole thing had been long in the planning and was not a spontaneous response to the elections, as is claimed.

‘I was woken up at about two in the morning last Friday morning. The roads coming into Jos and going out of Jos had been blocked by Muslim youths chanting Allahu Akbar. Other Muslim youths inside the town were by now burning churches and killing Christians. We have not had the exact figure of those killed.’

Those shot dead included the pastor of Cocin church in Nawarawa, along with three members of his household.

The Bishop said it was worse than similar riots in 2001, because then the attacks were with stones and knives and people could run away. This time, there was no running away. People who tried to flee were gunned down.

‘It seems to have a dimension that is beyond local,’ he said.

A woman friend of the bishops had three young men living in her home on ‘national service’, Nigeria’s tradition of a duty of public service peformed by all students as they leave university. They were shot and their bodies set fire to in her house.

The Bishop said the killing has stopped but the way some of it has been reported, implying it was Christian riots against Muslims, meant that tensions are still running high.

One unfortunate thing that seems to have happened, he said, is that in the middle of the riots the Government imposed a curfew for 5pm instructing troops to ‘fire at view’. Some Muslim youths who went out after 5pm were subsequently shot and killed, and the church was blamed for this.

‘But we know nothing about this,’ said Bishop Kwashi, who is launching an appeal for funds to rebuild his community’s burned homes and churches and shattered lives.

‘You just do not get this kind of crisis over an election,’ said Bishop Kwashi. ‘The gun shots, the military uniforms and police uniforms, the amount of deaths and killings and destruction, whole groups of Christians shot down, Christian quarters completely burned down, razed to the ground. All the burnings took place at the same time. The same time. People killed. Women and children shot dead.’

All kinds of funerals are now taking place. We spoke on Thursday, the day the pastor was buried. ‘I am trying to give you accurate figures. I am trying not to exaggerate. No matter how much time it takes, I want to be honest and tell the truth. So even if it does appear Christians should take the blame, we will take the blame.’

So is it possible, as the Bishop suggests, that this was indeed more than simply election-provoked riots?

I hope not, because if so, the implications for us all are too awful.

A well-placed source has in this context referred me to LET – the Army of the Righteous – a Deobandi movement linked to Al-Qaeda that has emerged from the fundamentalist battlegrounds of Pakistan and is thought by many to be behind the attacks in Mumbai.

Stephen Schwartz and Irfan Al-Alawi of the Centre for Islamic Pluralism have written an analysis of the LET, Lashkar-e-Taiba, in this week’s Spectator.

They don’t link it to Jos however and I do pray my source is wrong. Don’t read their article if you want an untroubled weekend.