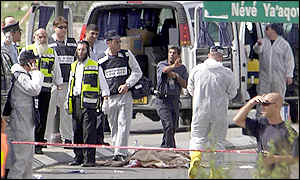 What is Theologically and Morally Wrong with Suicide Bombings? A Palestinian Christian Perspective

The following is taken from an article by Canon Naim Ateek published in the Sabeel journal Cornerstone, and subsequently expanded into a 35 page booklet. It is the best critique of suicide bombing I have read.

“The issue of Palestinian suicide bombings has become a familiar topic to many people throughout the world. It is easy for people to either quickly and forthrightly condemn it as a primitive and barbaric form of terrorism against civilians, or condone and support it as a legitimate method of resisting an oppressive Israeli occupation that has trampled Palestinian dignity and brutalized their very existence.

As a Christian, I know that the way of Christ is the way of nonviolence and, therefore, I condemn all forms of violence and terrorism, whether coming from the government of Israel or from militant Palestinian groups. Having said that clearly, it is still important to understand the phenomenon of suicide bombings that tragically arises from the deep misery and torment of many Palestinians. For how else can one explain it? When healthy, beautiful and intelligent young men and women set out to kill and be killed, something is basically wrong in a world that has not heard their anguished cry for justice.

The Palestinian resistance to the Israeli occupation of the West Bank and the Gaza Strip took a very important turn since the early 1990s. Young Palestinian men, and more lately women, started to strap themselves with explosives, make their way to Israeli Jewish areas and blow themselves up, killing and injuring dozens of people around them. Between the beginning of the second intifada in September 2000 and February 22, 2003, Palestinian militants carried out 69 suicide bombings in the Gaza Strip, the West Bank including Jerusalem, as well as inside Israel, killing, according to Israeli statistics, 341 Israelis including soldiers, men, women, and children. In the same period, the Israeli army killed 2,106 Palestinians including police, men, women and children.

For the last 35 years, the Palestinians have been engaged in resisting the occupation of their country. For many years they have worked through the international community to bring an end to the Israeli occupation, but they have been unsuccessful.