“I have followed your career and ministry for many years now and by all standards it has been blessed, brave and controversial! I have not always agreed with your take on Israel but am prepared to accept your right to speak out freely. That is why I believe the imposition of silence on you to be wrong.” The Rt Revd and Rt Hon The Lord Carey of Clifton, retired Archbishop of Canterbury.

“Reverend Stephen Sizer seems to have come under attack by certain individuals intent on discrediting the excellent work that Stephen does in highlighting the injustices of the Palestinian Israeli situation, in particular by his very thorough analysis of “Christian Zionism”. Might I suggest that such criticism is part of a wider pattern of demonising those who dare to stand up and speak out against Zionism, a philosophy that precludes the existence of the state of Palestine? … Active and well informed individuals such as Reverend Stephen Sizer, withstand a considerable amount of inappropriate criticism. Indeed many MPs and Peers are also attacked… I do admire the excellent work that he does and personally, I would give no credence at all to any claims that he is anti-Semitic.” The Rt Hon Jeremy Corbyn, Leader of the Labour Party and Memberof Parliament for Islington North. “I am quite clear in my own mind that Stephen is not anti-Semitic, nor has he said or written anything that could possibly be construed to be anti-Semitic. Thus the central thrust of the Board of Deputies’ complaint – that Stephen has made anti-Semitic statements and/or republished the anti-Semitic sentiment of others –simply does not stand up to scrutiny.” The Most Rev. Dr. Mouneer Hanna Anis Bishop of the Anglican Diocese of Egypt with North Africa and the Horn of Africa and President Bishop of the Anglican Province of Jerusalem and the Middle East

“Stephen has devoted a great deal of his intellectual and theological gifts to resisting every endeavour to provide a religious and specifically Biblical justification for Zionism.  Holding such a view is not and should not be treated as anti-Semitic.  His target includes those Christians who believe the Bible supports the Zionist vision.  Stephen has sought to de-construct any religious/theological wall preventing us facing the difficult questions of justice for Palestinian people in the Holy Land.  This important, if controversial work,  has the support of some key Jewish thinkers and activists. These strongly held views have not prevented Stephen from a clear commitment to the peace and well-being of all the people in the Holy Land and of all whatever their ethnic and political identity. He may be a controversial figure but he is a courageous and godly man.” The Right Revd John Gladwin, retired Bishop of Guildford “I have known Stephen for over thirty years. I know him as a man of integrity and forthright views with the courage to express those views. He has always been measured , and his message is, and has been, one of Christian faith and the love of truth. His books and his articles are suffused  with objective discipline. There is nothing in them, or him, that could be remotely construed as anti-Jewish, anti-Jew, anti-Semite or even anti Israel as a state.” The Right Revd Riah Abu El Assal, retired Bishop of Jerusalem. “No doubt Stephen Sizer’s detractors are acting in good faith, and I agree with them that antisemitism must be confronted. But they are regrettably misguided in their allegations about Stephen Sizer. He is in no sense antisemitic, and instead is fully in sympathy with those who seek to eradicate all forms of Jew-hatred in the modern world… Having worked with the Counter Terrorist Agency of the Crown Prosecution Service, I am fully in agreement with such sentiments. We in the Jewish community must be vigilant to insure that our community does not suffer from attack. But it would be a travesty of justice to construe Stephen Sizer’s mistake in linking an offensive website to his Facebook and not removing it immediately as a deliberate attempt to encourage racial hatred.” Rabbi Professor Dan Cohn-Sherbok, Professor Emeritus of Judaism, University of Wales.

“Stephen you have single handedly done more to change this conversation about Christian Zionism than anyone I know. I think there have been about a dozen of us in the West (fewer?) who have raised this alarm. But you have been in the lead.” Dr Gary M. Burge, Professor of New Testament, Wheaton College and Graduate School. “There was not a hint of anti-Semitism in anything Stephen wrote or spoke about. On the contrary, the message was always clear – a concern that some of Israel’s policies and ideologies can create a misguided association of Judaism with dispossession, colonisation and discrimination. This is why there are always many Jews, like myself, who work in close association and collaboration with Stephen for the sake of a universal goal of bringing peace and justice to Israel and Palestine. This is also why many progressive Jews read and rely on Stephen’s scholarly work and come in great numbers to attend his talks.”, Dr Ilan Pappe, Director, European Centre for Palestine Studies, Exeter University. “I await your vindication. You are a messenger just like Martin Luther King or Nelson Mandela. Unlike them you may find that in this life you will not be accepted except by a few but in years to come the world will realize you were a champion of justice and human rights. Do what is right in God’s eyes. May the Holy Spirit give you strength. Keep your roots and values in God’s word in a loving relationship with Jesus. You are always in my thoughts and prayers. Len Rodgers, Director Emeritus of Evangelicals for Middle East Understanding, Founder/President-Emeritus Venture International, Founder of World Vision Middle East “I am astonished at the fact that this charge has been made when it has been so clear from former investigations that he has done nothing to warrant it. I suppose that the disturbing thing is the way that the moment a person questions the policies or actions of Zionists, they are accused of being anti-semitic. My grandfather experienced that as Bishop of Jerusalem in the post first world war period when he supported some of the Rabbis who were questioning the philosophy of Zionism. He was immediately branded as anti-semitic. It has been my own experience, on the occasions when I have challenged the biblical interpretation of the Christian Zionists, that there has been an unreasoning and often almost violent reaction, so I have sympathy with the situation in which Stephen finds himself.” Revd Canon David MacInnes, former Rector, St Aldates, Oxford.

“Stephen – there are a lot more … who not only don’t think you are anti-Semitic but know that you are a deeply principled, brave, intelligent and all together wonderful human being. And that we are going to need others to step up if we are to avoid further terrible injustices, particularly for Palestinians. Let our collective good will embrace you and remember God’s love.” Sara Apps, Campaigns and Communications Officer, Palestine Solidarity Campaign and co-founder of Labour Friends of Palestine & the Middle East. “I have read with great sadness the complaint which came to you through the Board of Deputies of British Jews and Stephen’s response.  I am afraid there is a pattern across many sectors of society of mobilising such complaints against people who criticise Israeli policy… Stephen is not in the least way anti Semitic.  This is a disgraceful and completely false allegation and those who have made it should be held to account for their wickedness.” Clare Short, Former Secretary of State for International Development.

Antisemitic? We don’t think so either 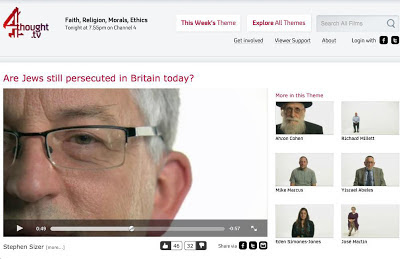 “He has recently explained, however, that he ‘categorically reject[s] any position that threatens the territorial integrity of Israel as a sovereign nation…. Stephen Sizer’s work has the merit of clearly setting out the issues that divide the two sides, and furthermore doing so without the rancour or sheer nastiness of tone typical of the polemics in the conflict.” (p.571). Anthony Julius, Chairman of the London Consortium and a Visiting Professor at Birbeck College, University of London. His book Trials of the Diaspora, is a magisterial 800 page examination of the history of Anti-Semitism in England. “I am glad to commend Stephen Sizer’s ground-breaking critique of Christian Zionism. His comprehensive overview of its roots, its theological basis and its political consequences is very timely. I myself believe that Zionism, both political and Christian, is incompatible with biblical faith. Stephen’s book has helped to reinforce this conviction.” John Stott, (deceased) former Rector Emeritus, All Soul’s, Langham Place, London, the principal framer of the Lausanne Covenant (1974) and founder of the Langham Partnership International. “This is a very fine and important book.  All Christians who believe that Jesus favoured peacemakers, should read it and realise what terrible harm is being done in the name of Christianity.  And all who are concerned about the Israeli/Palestinian conflict should read it to understand how Christian Zionism disables the US as fair minded mediator.  European foreign policy thinkers should read it,because this distortion of US political space, puts a greater responsibility on European governments to stand up for justice and international law” Clare Short, former British Secretary of State for International Development

For the record, over the years, on this blog I have:

To clarify my position in my book Zion’s Christian Soldiers, I wrote the following:

“It is true that at various times in the past, churches and church leaders have tolerated or incited anti-Semitism and even attacks on Jewish people. Racism is a sin and without excuse. Anti-Semitism must be repudiated unequivocally. However, we must not confuse apples and oranges. Anti-Zionism is not the same thing as anti-Semitism despite attempts to broaden the definition. Criticising a political system as racist is not necessarily racist. Judaism is a religious system. Israel is a sovereign nation. Zionism is a political system. These three are not synonymous. I respect Judaism, repudiate anti-Semitism, encourage interfaith dialogue and defend Israel’s right to exist within borders recognised by the international community and agreed with her neighbours. But like many Jews, I disagree with a political system which gives preference to expatriate Jews born elsewhere in the world, while denying the same rights to the Arab Palestinians born in the country itself.”

See also:
Response to the Complaint of Misconduct from Stephen Sizer
Letters of Support
Conciliation Agreement