The Restoration of Israel: Christian Zionism in Religion, Literature and Politics 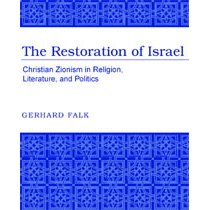 A Review for the Catholic Historical Review

Dr Gerhard Falk is a professor of Sociology at Buffalo State University, New York, and the author of 15 other books on a diverse range of subject including deviant nurses, football, grandparents, stigma, fraud, ageism and murder. In this particular book, he traces the influence of the Hebrew Bible in history and civilisation and then explores how Christians helped nurture and facilitate the return of Jewish people to Palestine, also called Restorationism. Further chapters evaluate Jewish support and Muslim resistance to the return.

At times Falk’s use of rather awkward terminology suggests he is either unfamiliar with Christianity or English or both. For example, two final chapters deal with what Falk describes as ‘Displacement’ and ‘Two-Covenant’ theology. The former is more usually referred to as ‘Replacement’ theology. On page 8 he also claims “It is surely no exaggeration to say that the growth of Christianity as a world religion depended as much on the satanization of the Jews as any other contributing factor.”

On page 158 he reinforces this by claiming the Roman Catholic Church, also “taught its billion followers to regard all Jews as ‘Christ killers’ with the consequence that Jews living at any time anywhere became the targets of revenge murders, finally resulting in the Holocaust. All this has been described in an avalanche of literature in every European language, far too voluminous to be reviewed here.”

Besides sweeping generalisations, simple factual errors abound. In the preface Falk refers to Tyndale but on the back cover calls him Tindale. Similarly John Wycliffe is given two different sets of dates. “(1320-1384)” on page vii and “(1325-1384)” on p.3.

As someone who has also written extensively on the subject of Christian Zionism, I examined his index and was initially gratified to find my name listed numerous times. However, on checking the references I discovered that without offering a single attributable quote, Mr Falk falsely libels me of being the 'leading Jew baiter in England' (p. 195) of defaming Judaism (p. 196) of 'hoping for the elimination of Israel' (p. 195), blaming the Jews for the destruction of the World Trade Centre (p. 195) and of repeating all the anti-Jewish polemics possible (p. 196). I must also deny his equally unfounded allegation that I am "the most influential Anglican preacher in England today" (p. 93). If only! Suddenly, remaining neutral and objective in writing this book review became rather personal.

I therefore wrote to Dr Falk inviting him to substantiate any of his allegations. I subsequently received a reply from Dr Heidi Burns, senior Editor of Peter Lang Publishing. It contained the wording of an errata sheet that they intended adding to supplies of the book. It listed the seven references to me and after each added, “I erroneously refer to the Rev. Stephen Sizer… This is not the case. It is an error.” The concluding sentence stated “In short, the author apologizes for mentioning these matters and believes that all references to the Rev. Sizer are not supported by the evidence.” In a subsequent letter, probably designed to dissuade me from initiating a libel action, Dr Falk confessed, “I must say that I am astonished that anyone would be interested in reviewing my book since it has been my experience that my writings have a tiny audience and have little impact on the events of this world.”

For someone who has allegedly picked up awards for "Excellence on Scholarship and Research", I can only deduce that Mr Falk has, on this occasion, to put it charitably, relied too heavily on secondary sources or his imagination. These errata comments, although welcome, do not give this particular reviewer much confidence as to the reliability of other sources quoted which I am unable to substantiate.  Other Jewish academics – notably, Dan Cohen-Sherbok and Gershom Gorenberg, together with Timothy Weber and Victoria Clark provide a more reliable assessment of Christian Zionism than Gerhard Falk. I recommend therefore he sticks to sociology and avoids writing on theology in the future.