The Street Child World Cup 2010 from Stephen Sizer on Vimeo.

In March 2010 the first ever Street Child World Cup will take place in Durban, South Africa. Street children from eight countries will come together to play football and find their voices through the game they love.

The Street Child World Cup will place street children centre stage, celebrating their potential and providing a platform for them to talk about their experiences, rights and ideas.

Street children will work with international coaches to express themselves on the football pitch and with specially trained artists, who will enable them to tell their stories and to be heard.

They will launch a campaign to win rights for street children all over the world.

An interview with Garth Hewitt. Footballer Gary Lineker has kicked off the latest project by the Amos Trust, which aims to give poor children around the world a voice through football.

The Street Child World Cup will bring together teams of street children from around the world to play in a football tournament in a year that will raise the profile of their human rights.

The BBC presenter said: “It is great that the Street Child World Cup will use this game, which is loved all over the world, to help give kids a fairer deal. No child should have to be on the streets, so if football can be a part of making a difference, that’s fantastic.”

Asked if this was the best way for children to achieve their identity, Douglas Alexander, cabinet minister for International Development, said: “I think children all over the world can learn something through football.”

Teams of street children from eight countries across Asia, Latin America, Africa and Europe will compete in the football tournament that will be hosted in South Africa during March 2010, before the FIFA World Cup. 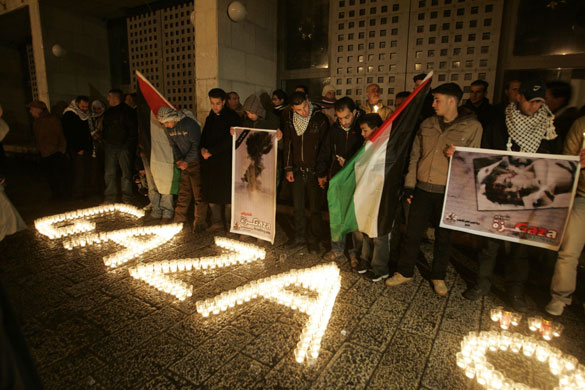 O God our prayer today is more like an inarticulate cry and our hearts ache. We saw a man in Gaza weeping beside his three little dead children – innocent beauty now bloodied in death

A massacre that started on the eve of Holy Innocents Day claims more and more women and children’s lives.

The people of Gaza with nowhere to run.

They are imprisoned under a harsh siege, bombed by the most sophisticated new weapons and then attacked in their own streets and houses.

O God where can they find refuge. No one has listened to their suffering for over 60 years.

O God of the oppressed and suffering we see you in the wounded of Gaza – we hear your cries of pain – we share your tears. May we never be silent in the face of such pain.

O God may world leaders at last hear the cries of the children and the suffering of Gaza.

May the siege be removed. The gates be opened. May they be allowed to have food, water, medicine, human rights, dignity, justice, democracy.

May they be treated as we would like to be treated.

And we pray that peace will come soon and that each person will recognise the value of the other and Israel and Palestine become a Holy Land once more.