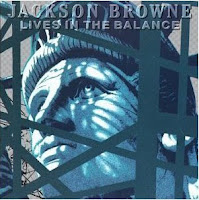 Why can’t I get this song by Jackson Browne out of my mind? Maybe its the hope rising within me that with the election of Barak Obama, we will see a change in US policy toward the Arab-Israeli conflict. Maybe there will be a renewed commitment on the part of the US administration to cooperate with the United Nations and achieve a multilateral solution as envisaged in the Road-Map to Peace. Just maybe.

Or maybe it reminds me of those lovely people who feel they need to hide behind their anonymous blogs to express their warped and cowardly views. Or maybe its because of the words of Jesus who said:

“Light has come into the world, but people loved darkness instead of light because their deeds were evil. All those who do evil hate the light for fear that their deeds will be exposed. But those who live by the truth come into the light so that it may be seen plainly that what they have done has been done in the sight of God.” (John 3:19-21).

One day everything will be exposed to the light of Christ and I can’t wait for that day. What ever the reason, just check out the videos that follow the lyrics and lets not be intimidated by those men in the shadows.

On the radio talk shows and the TV
You hear one thing again and again
How the USA stands for freedom
And we come to the aid of a friend
But who are the ones that we call our friends–
These governments killing their own?
Or the people who finally cant take any more
And they pick up a gun or a brick or a stone
There are lives in the balance
There are people under fire
There are children at the cannons
And there is blood on the wire

They sell us the president the same way
They sell us our clothes and our cars
They sell us every thing from youth to religion
The same time they sell us our wars
I want to know who the men in the shadows are
I want to hear somebody asking them why
They can be counted on to tell us who our enemies are
But they’re never the ones to fight or to die
And there are lives in the balance
There are people under fire
There are children at the cannons
And there is blood on the wire.”